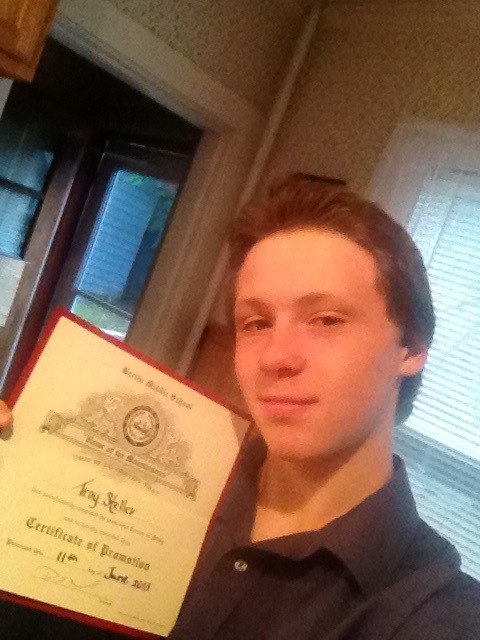 Go confidently in the direction of your dreams. Live the life you imagined.” Harry David Thoreau. Printed on the front cover of the Promotion Night program.

Last night my oldest child was promoted to High School! Oh boy! Where has the time really gone? I’m so proud of him for making it this far though this year has been one of the toughest in all of the 14 that I’ve been a mother. Junior High school, drama, dating, teenagers. Yikes! It’s also been one of the most rewarding as my 14 year old started his first job and, although I haven’t seen his final report card, his last progress report was at the Honors level!

He’s kicking it up about ten notches, knowing that he’s done with the Junior High stuff and about to enter High School where every grade counts toward achieving his ultimate goal; admission into the United States Air Force Academy. He has a plan, in fact, we spent hours planning out the classes he will take over the next four years to ensure his best chance for admission. He hopes to play football. He has a job. He’s done some community service and he will keep that up. He’s on the right path and I pray every day that he stays on it!!

Along with the items in the photo above, I included a card with a note explaining each item. Just something small to encourage, inspire and congratulate!

To Keep you afloat when you feel like you are sinking!

A place to store the memories you will create in High School!

Remember to pick yourself up and wipe yourself off and just keep on going!

Because there is always a little child in all of us!

Tips for Keeping Your Child’s Mind Active This Summe