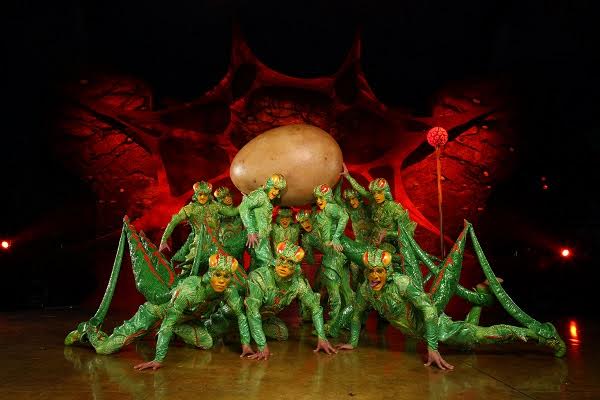 Cirque du Soleil returns to Manchester, New Hampshire in August 2016 with OVO, its newest touring show in arenas. The production will be presented at Verizon Wireless Arena, Thursday, August 25 to Sunday, August 28, 2016 for six (6) performances only, as part of a global tour in arenas around North America. The show is presented by Visa Signature®.

Thrilling more than 4.5 million people worldwide since the show premiered in Montreal in 2009 as a Big Top show, OVO will embark on a new journey, performing the same captivating production, but now in arenas, giving more people the opportunity to enjoy a Cirque du Soleil show in their own town.

And, we’re going to be there! I’m so excited to bring my family to one of these performances! The visual aspect alone is just completely stunning. Plus, Cirque du Soleil guys!! My Mom is probably even more excited than the kids are about going!! Okay, maybe not but it’s darn close!!

OVO, meaning “egg” in Portuguese, is a headlong rush into a colorful ecosystem teeming with life, where insects work, eat, crawl, flutter, play, fight and look for love in a non-stop riot of energy and movement.

When a mysterious egg appears in their midst, the insects are awestruck and intensely curious about this iconic object that represents the enigma and cycles of their lives. It is love at first sight when a gawky, quirky insect arrives in this bustling community and a fabulous ladybug catches his eye – and the feeling is mutual.

The cast of OVO is comprised of 50 performing artists from 12 countries specializing in many acrobatic acts. One highlight of OVO is the stunning Flying Act in which a group of scarabs soar high above the stage, from both edges to the middle landing on a platform.

Tickets for the general public ware available now (but don’t wait too long!) at www.cirquedusoleil.com/ovo . Tickets start at $35.00 (subject to change).

Enter Below for your chance to win four tickets to see the Cirque Du Soleil Ovo Show in Manchester, NH only during one of the six performances happening August 25-28, 2016. A winner will be selected on August 1, 2016 and notified via email – winner must reply to the email within 48 hours or will forfeit their prize and a new winner will be selected.

One thought on “Join Us for the Cirque Du Soleil ‘Ovo’ Show August 25 – 28, 2016, At Verizon Wireless Arena In Manchester! Enter Now to Win 4 Ovo Tickets! #Giveaway”