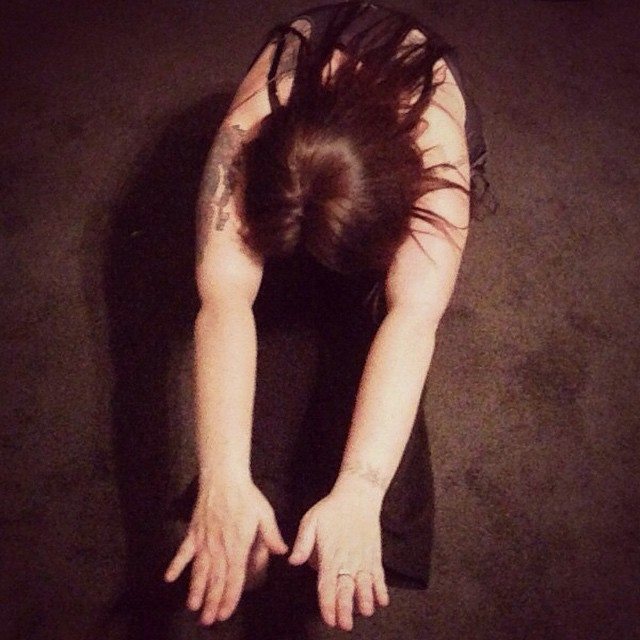 I hear at least one of these very sweet compliments every time I see someone I haven’t in a while. Or, just every time I see them. They are all well meaning compliments – and, yet, in losing over 110 pounds in 9 months, I have not truly found the ability to accept a compliment graciously. I’m not offended, and I love to hear it. But, mostly, I don’t believe them – and I am basically blind to whatever spell I’ve cast over their eyes. When I hear these things I usually just think to myself, “yeah, but look at my jelly belly roll” or “well, there’s plenty of thigh left” and, “but I still have 30 pounds to loose.” Why am I still fat shaming myself? And why the hell can’t I see what everyone else does?

Strange things happen when you loose a lot of weight. I’ve lost more than 110 pounds or, about 40% of my starting body weight since cutting out sugar and flour. I primarily eat low carb foods like meats, green veggies and some dairy. I also quit diet soda and started drinking water. I still have coffee but for every cup I add in an extra cup of water. And, I started exercising – first by doing DDP Yoga and then I added in walking and my new favorite, hiking. I’m working toward a goal of losing 50% of my starting weight and so far, I’ve dropped my BMI by 20 points from morbidly obese to overweight. Whenever I write down my weight I have to double check that I started it with a “1” rather than a “2” now that my body is well into “one”derland. My rational mind knows how far I’ve come – but my fat mindset focuses on how far I’ve got left to go – just another 30 pounds and maybe, just maybe, when my BMI hits “normal weight” my mind will catch up too, right?

A few weeks ago I panicked as the waitress led us to a booth and it looked like I wouldn’t fit. The old me would have had to hold my breath, this new me, which I don’t really physically see (the mind’s eye is an odd player) had more than enough room. Just after Christmas I purchased a few new pairs of jeans in a size I wore in the 2nd grade (11/12). (9.5 months ago I was sucking in my gut to zip my size 24s.) They’ve already started to sag in my bum and waist and I’m in need of downsizing again (size 9/10? how is that even possible? nope – not model thin but seriously single digits?). Yet, I was so convinced that that particular brand was just grossly mis-sized that I even searched online for customer reviews that would confirm my idea that they run big. I couldn’t find any. In fact, they all said that this brand runs true-to-size.

Also, I don’t have to restrict my shopping to special stores or departments anymore. But, I often feel like I should. Last week, I needed some Cuddle Duds (thermal underwear) for cross country skiing and winter hiking. I read the size chart, knew I needed a medium, thought for sure that I couldn’t fit into a medium, brought home the large then laughed at how loose they were. And, when I’m shopping in the “regular” section of a department store (well, unless its the bra department but that is another post), or in a store that I could barely fit through the door of a year ago, I continuously wonder if the other women think “what is she doing shopping here?” When in reality, I’m probably a lot less visible to them than I think I am – I am just a woman, shopping for new clothes, just like they are. (I’m going to skip talking about the financial impact of weight loss in this post – but wow, clothes shopping during continued weight loss can really add up!)

My knee caps feel funny when they touch together, no longer held apart by lots of thigh. The first time I felt it, it was such an odd sensation – I also realized I need to moisturize more! My bones stick out from places where I didn’t actually realize bones existed. One morning I woke to my husband counting, and poking, each of my ribs. He was just in awe and both of us were in complete disbelief, though, I suspect for very different reasons in that particular moment. “Hi husband,” I thought, “I lost weight, have a lot more energy, still love sleep though!”

My husband failed to recognize me in the store from the back during our last shopping trip. A few days ago we were walking into the grocery store and being flirty and playful with one-another. He swung his arm around my shoulders and tugged with enough strength to pull my almost 300 pound body in closer – except that I’m 110 pounds lighter now, and I nearly went flying across the parking lot. Giggle, but another example of how fast things changed – and how even he isn’t used to all of the smaller me quite yet. In his defense, however, this man never stopped telling me I was beautiful – not when we met and I was 240 pounds, not when I gained almost 60 pounds during our first five years together and reached my highest weight – he told me I was beautiful and has found me sexy every step, inch and pound of the way. He’s a keeper!

I’ve never been vain. In fact, I’ve more often been the first to put myself down. After years and years of being teased because of my weight in school, I continued the teasing. I was always cracking “fat jokes” about myself and it became who I was. I think I addressed the elephant in the room regularly – because I always assumed I was the elephant in the room.  Today, though, after some pretty awesome success, I’m more critical of my own body flaws then I ever was before. I know that I need to find a way to get past that. I’ve worked hard to get here and I deserve to celebrate myself!

I actually considered that maybe I need some help to wrap my mind around my new body. I did a little research and realized that body image distortion is a real phenomenon during, and after weight loss – women who have lost a lot of weight often still ‘feel fat’ or think that we look overweight.  It turns out, body image distortion after weight loss is a real thing. I found this NBC News article, ‘Phantom fat’ can linger after weight loss to be especially helpful. It definitely made me feel that one, I’m not alone and two, these feelings will improve. I can admittedly see the changes in me when I look at comparison photographs, but little has changed in the reflection in my mirror.

Of course, I didn’t always let myself see the “real me” back when I was at my heaviest, either. Below is a photograph snapped by my long time friend’s mother. I hadn’t seen my “pirate” friend in years, it was great to run into her. But, when I was tagged in this picture, I clicked “remove from timeline” immediately. I couldn’t actually believe how large I truly was – and the only photographs of me allowed during most of my Facebook years have been chest up or ones where my children were placed strategically in front of me. I’m embarrassed now that I kept such a treasured moment hidden from the world – so here it is!

So, there are a ton of benefits to the weight loss, so much so that I’m saving them for another post (and maybe yet another post on low carb eating, hiking, DDP Yoga). I didn’t write this post to whine, I wrote it so that others struggling with knocking knees, phantom fat or other weird weight loss woes know that they really aren’t alone. We all need to be more accepting of ourselves, no matter our shape and size! I’m still working on it but I know I’ll get there!