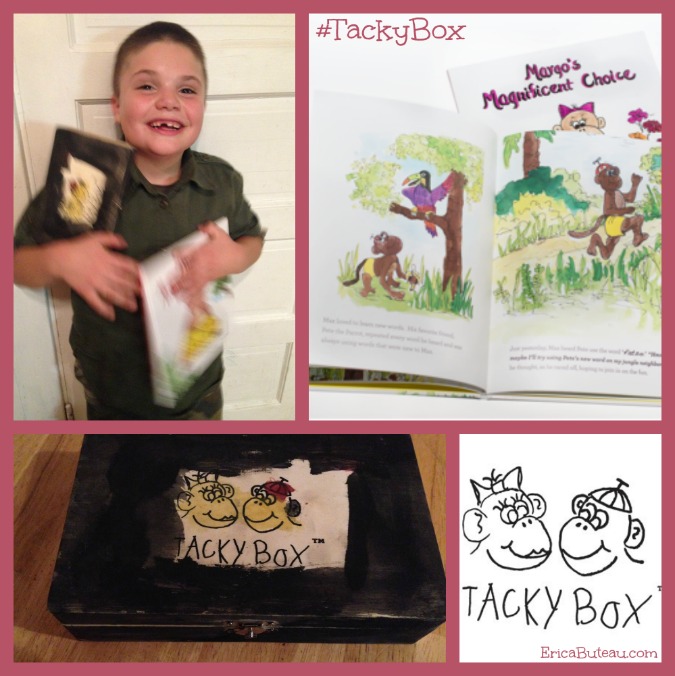 This is a product compensated post. I recieved a Tacky Box Set to fascilitate my review. All opinions are my own.

Last week I introduced the seven year old to Max by reading him the story, Max’s Magnificent Choice and then presenting him with his very own Tacky Box. He really enjoyed the story and the book, although while he started reading it himself (my big boy 2nd grader is, after all, almost eight!) he stumbled over a few of the larger words at the start. Not only does this book teach a great lesson about not using tacky words (i.e., cursing, swearing, name calling, etc.), it also helps build up the early reader’s vocabulary!

When said almost eight year old and I finished reading the book we talked about the lesson and I was really grateful that he understood. He’s really very good about not using Tacky words already- in fact, his dad and I debated recently following a dinner-table conversatio when the little guy said a kid in his class had said a bad word and he told his teacher on him.

My big mouth quickly asked, “What did he say?!” and seven year old responded hesitantly that he couldn’t possibly repeat it. So, I asked what letter it started with. He said, “C!” And I nearly choked on my steak. The “C” word is worse than tacky!!! So I said, “Oh my gosh! Did he say COW?!” clearly joking. He giggled and said “No” and I said, oh, was it CRAP?! Again, joking here… and the little guy put his head down, embarassed by the horrendous word I’d just uttered. My mind was racing, and all I could think was, Oh, crap! My kid’s a prude!

Husband was totally in the camp that “crap” was a bad word. I don’t know… it’s not a nice word- especially since it conjures up images of bull er, poo. But, jeeze louise! it could be so much worse! Shhhh its around the corner!!  Ok, ok, I’m being tacky now. But, tell me- does “crap” go in the Tacky Box or not?

Whatever the answer, and in all honesty, I’m glad that 7yrold is tactful and understands the difference between naughty and nice words- even if he is a bit more extreme than me its in the positive direction! I’ll take it. My teenagers? They would fill a tacky box in a day… not impressed at all with the things that come out of their mouths sometimes- so, maybe I’m doing something right this time around?

A mother and grandmother duo created Margo’s (Max’s) Magnificent Choice, a book sold with The Tacky Box Set, which is an effective parenting tool as well as a fun read for children.

The two books – gender specific to the child but otherwise the same – illustrate the negative effect of tacky words and behaviors and the rewards of choosing kindness. Margo’s (Max’s) Magnificent Choice is a 32-page hardcover book. Each page has a brightly-colored original watercolor painting that will capture the imagination and interest of young children. The fun story is an affirmation of the power of choosing to be kind and introduces children to the concept of locking up unkind words and actions in the tacky box and never using them again.

Through the pages of these beautifully illustrated books, children will follow Margo (Max) the Monkey as they learn the value of choosing kind words over tacky words. Boys and girls will want to emulate the monkey’s magnificent choice to refrain from repeating tacky language that he or she is sure to hear.

A wise old owl equips Margo (Max) with a Tacky Box to help her (him) lock up undesirable words and remove them from heart and mind. After reading the book, parents can present their child with his or her own authentic Tacky Box. The act of decorating the Tacky Box transforms the box into the child’s personal property.

The Tacky Box becomes a visual tool to help remind children to choose kind words and get rid of undesirable ones. Parents will be amazed at the effectiveness of writing the tacky word on a piece of paper and putting it in the box. Children become the example of good manners and a kind heart.

The Tacky Box Set includes a hardback copy of Margo’s (Max’s) Magnificent Choice, an authentic, stamped 5”x8” wooden Tacky Box, a note pad with the image of Max and Margo, and suggestions for use from the authors. For optimal success, all three must work together.

Want your own Tacky Box Set? Enter the Rafflecopter below! A winner will be randomly selected on 1/24/14. Good luck!

7 Important Facts You Should Know When Reading the Bible