The Invisible Girls: A Memoir by Sarah Thebarge #Review #MustRead 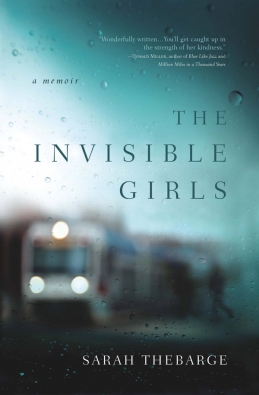 I participated in a campaign on behalf of Mom Central Consulting for Jericho Books.
I received a product sample to facilitate my review.

The Invisible Girls: A Memoir

“Twenty-seven-year-old Sarah Thebarge had it all – a loving boyfriend, an Ivy League degree, and a successful career – when her life was derailed by an unthinkable diagnosis: aggressive breast cancer. After surviving the grueling treatments – though just barely – Sarah moved to Portland, Oregon to start over. There, a chance encounter with an exhausted African mother and her daughters transformed her life again.

A Somali refugee whose husband had left her, Hadhi was struggling to raise five young daughters, half a world a way from her war-torn homeland. Alone in a strange country, Hadhi and the girls were on the brink of starvation in their own home, “invisible” to their neighbors and to the world. As Sarah helped Hadhi and the girls navigate American life, her outreach to the family became a source of courage and a lifeline for herself.

Poignant, at times shattering, Sarah Thebarge’s riveting memoir invites readers to engage in her story of finding connection, love, and redemption in the most unexpected places.”

“Sarah Thebarge is a speaker and author who grew up as a pastor’s kid in Lancaster, Pennsylvania. She earned a masters degree in Medical Science from Yale School of Medicine and was studying Journalism at Columbia University when she was diagnosed with breast cancer at age 27. Her writing has appeared in Just Between Us,  Relevant and Christianity Today. Her blog was featured on MSNBC.com.  She has spoken at Donald Miller’s Storyline conference, women’s retreats, and other venues. She was voted one of 40 Women Under 40 who are challenging taboos of the Christian faith.
Sarah’s writing for Christianity Today earned her first prize from the Evangelical Press Association in 2012.  Her first book, The Invisible Girls, will be released by Jericho Books in April of 2013.   She currently lives in Portland, Oregon.”

When I first learned about this book, and Sarah’s battle with breast cancer I knew that this book review campaign was one that I’d love to participate in. I talk often about the effects breast cancer has had in my family over the last few generatations and its something that I’m always grateful for the opportunity to generate awareness of. When I received the book I thought I’d find it interesting but was a bit nervous to start reading it.

Religiously speaking, I’m in an unsteady place. I was raised Catholic, attended CCD classes once per week, sang in the Church choir every Sunday, etc. I made it through my Confirmation in the 10th grade and I was out of there! I went back to Church for Midnight Mass, funerals, weddings and three Sundays when I thought, for a fleeting moment, that I should. As time passed in my early adult life through my early to mid twenties I broke nearly every “rule” of the Catholic Church. Pregnant before the wedding, married by a JP, divorced, etc, I didn’t feel like I belonged in the Catholic Church anymore.

In my mid to late 20’s I met a number of Spiritualists, Wiccans, Psychics, Tarot Card readers, Reiki and Crystal Healers and the like. My mother and aunt opened a store featuring metaphysical supplies, gifts, crafts, books, soaps and such. They had psychic parties. And, I read a lot of books. I talked to a lot of very different and cool people. I tried to see religion, spirituality, etc. through their eyes. Everything I looked into fizzled out eventually. In my early 30s I tried volunteering my time at a Christian based local Church to see if the people were a “fit” for me. I enjoyed giving back but didn’t connect there either. I was looking for something, and possibly still am, but I’m still not sure what it is.

I started reading the Bible (as an adult rather than for assigned reading) and had to stop. My husband was raised very Catholic, attended Catholic school with teachers that also happened to be Nuns. I’d wake him up at all hours of the night pusing him to engage in conversations with me about the Bible and the things that I read in it. I couldn’t wrap my head around so many of the things that I read. Sense? Logic? Where was the logic here I asked? I don’t think I’m supposed to question the Bible, or God, or any of the things that I was taught in CCD. But, well, I do. The logical part of my brain fights what my husband says is “faith”. I’m still figuring it all out. I want  to believe in something. But, I want to believe in it because I DO rather than because I was taught or told to think/believe/assume/resign myself to…

So, when I started reading the Invisible Girls book’s description, the word “God” almost scared me away. I’m still figuring things out and I’m just not ready to read that God saved someone from breast cancer while forgetting that God gave that same someone breast cancer to begin with. I don’t at all hold anyone’s beliefs against them (even if I do occassionaly engage my husband in conversations that start with “But, its bull sh*t). I’m not saying any religion is right or wrong- I’m just saying I don’t know what I believe today and I probably won’t know tomorrow. I will figure it out someday, though. Because I really do want to take a position at some point in my life.

I’m so glad I didn’t let my internal religious debate deprive me of this book. The Invisible Girls is so powerful, compelling and intriguing. I picked it up to thumb through it, honestly thinking I wouldn’t ever end up reading it. I finally had to tear myself away four chapters in because I needed to get back to work. Sarah takes you through her experiences with breast cancer and meeting these amazing Somali girls so eloquently. I literally lost myself in the book and couldn’t wait to read more.

In fact, what I learned was that there were no divides. Sarah found herself looking back at her through the eyes of a few little girls that were so different from her- their skin color, their heritage, the country where they were born, their religion… none of that mattered because they were the same. Cast out, unsure, alone in a world of people. This is a story not about God but about life, humanity, the very core of how people can make a difference in the lives of others. A tale of survival, going against all odds and coming out on top. It’s inspirational, thought-provoking and so powerful. It also has a purpose…

Sarah’s memoir is in print today because she continues to want to help these Somali girls that she met by chance on a train. The profits of the book are intended to send them to college. You get a wonderful read, they get an education. I challenge you to overcome whatever obstacles you might have to reading The Invisible Gilrs: A Memoir by Sarah Thebarge. Meet  Sarah, Hadhi and her five daughters, Fahri, Abdallah, Sadaka, Lelo, and Chaki. You will be glad that you did.