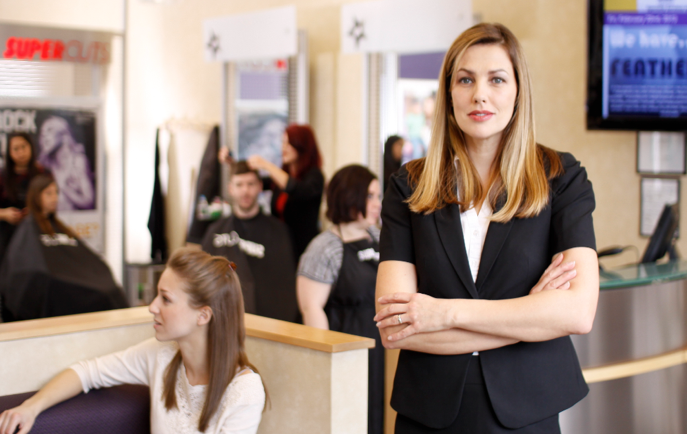 This post is the first of three posts over the next three months sponsored by Supercuts!
I’m very excited to partner with them to bring you all this great information!

As a small business owner myself, I can truly see the value in purchasing a franchise. The “hype” is already built, the name is recognizable and chances are there is already a strong customer base wishing for the franchise to show up in their town. I also love Supercuts! I almost never make an appointment to get my hair cut- its always impromptu. Supercuts accomodates people like me and although there isn’t one close by (maybe I need to change that?) but there is one near my brother and sister-in-law that I’ve stopped into a few times to have my hair done before a night out in the big(ger) city. I’ve always left happy and feeling my best!

While doing some research on Supercuts and franchising in general I ran into this really cool NPR Story about Martha Matilda Harper. Her story is very inspirational and is definitely worth the read (and definitely check out the photo of Martha with her body length hair! So awesome but I don’t have permission to share. This photo was her advertising. Smart lady!).

At the age of seven, Martha was sent away by her father to work as a domestic servant. She worked as a servant for 25 years, saving money.  When Martha had saved enough she began working full time on a hair tonic that she had created.  That little hair tonic was the start of what would eventually become a company with over 500 franchises and a full line of hair care products. Her big pitch? She marketed to low-income women like she once was.

Such a cool story! Admittedly, I’m a huge fan of anything that ties to lifein the late 1800’s and early 1900’s- and, yup! I seek out cellar holes and abandonded homesteads!

Supercuts is a Super Business

Okay, getting back to the point.  That same NPR story, “The Roots of Franchising Took Hold in a Hair Salon Chain,” goes on to discuss the modern day Supercuts franchise and Gary robins who owns 41 Supercuts today. Gary talks about video cassettes. Remember those? Exactly the point. He says- Haircuts are timeless, necessary and so he dumped the video rental granchise (or it dumped him?) and purchased his first Supercuts. It didn’t take him long to realize Supercuts is a Super Business!

The Truth about Supercuts and Franchising

Here’s a Link to a Franchise model.
Here’s a link to the Operations Infrastructure and how it works.
The Role of a Franchisee

The Software You Need to Be a Serious Artist

How IT Services Reduce Business Struggles