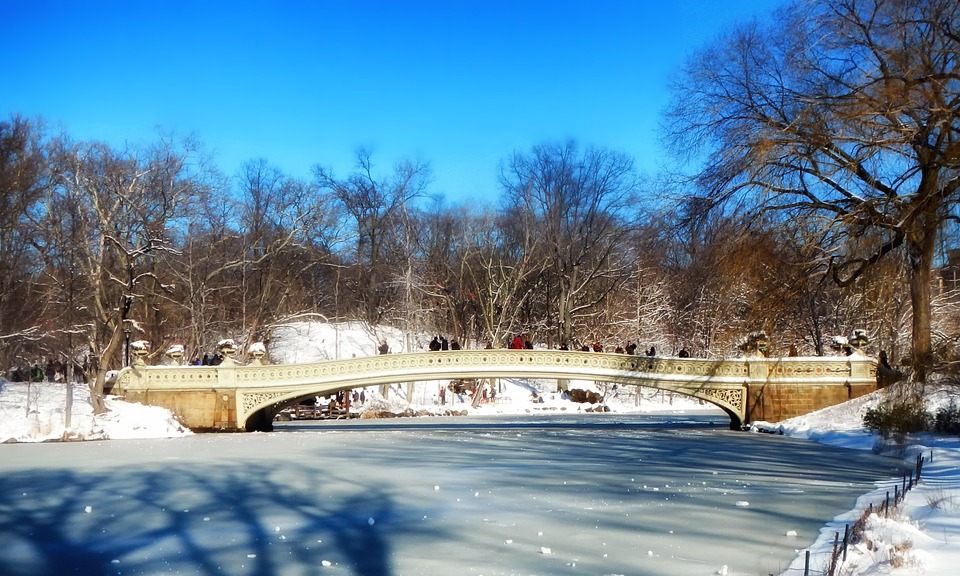 If you’re heading into New York for the holidays, or considering a quick romantic break in the Big Apple this post is going to help you squeeze the most out of a short break in New York this winter.  It’s particularly helpful for couples, but romance isn’t limited to being in a partnership – a solitary walk in Central Park as the snow falls gently onto a frozen lake has romance.  Indeed, particularly at this time of year, if we’re not in a relationship we tend to feel it now more than ever… almost as if being single means having a limited experience – but there’s romance everywhere, so keep an open mind with the suggestions below as they’re just as relevant for a solo trip in the snow where the focus is on self-love.  If, however you’re heading to New York City with children, be sure to check out this article instead.

First off, let’s deal with some practicalities.  If you’re flying into New York there’s a good chance you’ll be arriving at one of three airports; JFK, LaGuardia or Newark.  Parking around Newark Airport can be a particular challenge even though it’s in New Jersey.  If you have a friend or relative suggesting they meet you at the airport it might be more convenient to meet downtown, or at their home, as there are a number of public transport options that will get you into the heart of New York in a jiffy!

The next consideration is where to stay.  New York is expensive, and in reality, the best option might be to stay with a friend or relative in their swanky apartment… however, presuming you aren’t blessed with such a situation the next best thing would be to get onto AirBnB and find a vacation rental; whether that’s a room in a house or an entire apartment – it will often provide better value than a hotel, and if you’re comfortable with staying in a district that isn’t bang in the centre of New York there are plenty of bargains to be found.  If budget isn’t such an issue there are plenty of fancy hotels in areas such as Soho and Manhattan that can provide all the luxury you crave.

In terms of getting around, most people visiting New York don’t both renting a car as there’s a fantastic metro system, and with over 50,000 taxis (or similar) operating in the Big Apple, it’s always possible to get a cab.  The cheapest option is to get a MetroCard pass which offers a seven day unlimited pass that can be used on buses and the metro for just $29.

Here are five ideas to help you on your way…

Even in winter, a sunset sail around the Statue of Liberty provides an incredible view of the skyscrapers, the sunset, and the iconic Statue of Liberty. The great news is, the cruise often comes complete with cocktails, but whilst it’s one of the most traditionally romantic dates in the city – you’re not alone in thinking this might be a romantic idea; so expect to be sharing the sunset views with a boat load of amorous travellers.

Perfect for a cold night are the smorgasbord of decent comedy clubs in New York City; a good option to consider is the Comedy Cellar where you never quite know who will perform that night, but it’s a favourite haunt for famous comedians to test out their new material… including Chris Rock and Amy Schumer.

You’ll want to wrap up warm in order to walk across this iconic landmark that is one of the oldest bridges in the United States, and at 1,595 feet it’s a fair distance in consideration of how exposed it can be when the freezing wind is nipping at your neck; but it’s worth the walk when on the other side you can enjoy a mug of mulled wine and some roasted chestnuts from a traditional street vendor.  However, this one is best reserved for a clear sunny day as doing  the walk in the snow or rain is just hard work.

After enjoying a hand-in-hand walk next to the frozen lake of Central Park you can meander to the zoo where you’ll have a wonderful afternoon of gentle entertainment where you can see sea lions, seals, snow monkeys, polar bears and even snow leopards in a slightly more natural habitat.

The filming location for one of the most played first dance songs of all time; “You and Me” by Lifehouse, Grand Central Station makes for the perfect spot to sit and watch the world go by; enjoying the melting pot of cosmopolitan personalities that make-up this intriguing city.

In reality, New York is a huge city with tons to offer in Winter.  The above suggestions are a solid starting ground, but a trip should be tailored to your specific interests and unique requirements rather than a generic list.  Be sure to fully research all the options before heading to NYC as there’s so much to do you can end up feeling like you’re missing out the whole time.  The best advice therefore is to plan ahead, even if you’re not a fan of detailed itineraries, just have some options in mind that you would like to experience.

5 Ideas on How to Start Being More Adventurous in 2022