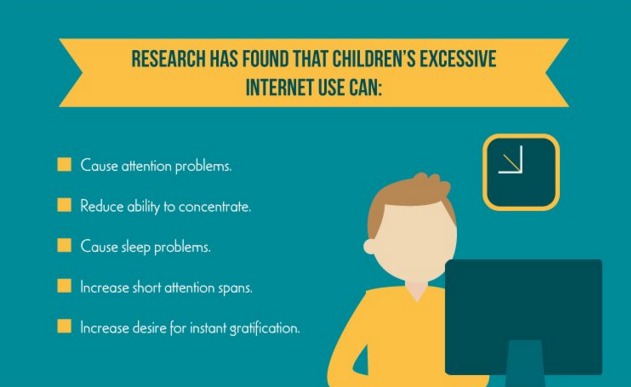 Parents can feel at loss about how to cope with their children’s use, some might say addiction, of the Internet and social media. Is it a good or a bad influence? Used responsibly it gives them access to interactive learning resources and new information. However, round the block access to the Internet can be damaging.

A new study from of 3000 parents by Stop Procrastinating, the productivity website, found that a majority of parents discovered that their children were using social media and browsing the web at night instead of sleeping.

The survey found that children were less able to concentrate and performed less well in the classroom as a result. Parents said that teachers noticed a gradual drop in performance in the classroom as well. The survey also found that children who do their homework while ‘multitasking’ by also checking social media and instant messengers were less likely to remember what they studied.

The study also asked parents for the best successful strategies for weening their children off from overuse of the Internet. Parents suggested a combination of building up a trusting relationship with their children, so that they were able to have open conversations about the Internet without stress and confrontation, and boundary-setting by parents were most effective.  Some parents also tried to make cutting down on internet use an enjoyable and fun challenge that their children could share and compete with their friends by creating a digital detox challenge week.

The survey also found that parents are more successful at cutting their children’s internet use if they work with other parents and the school. If all a group of friends are all treated in the same way they will feel less pressure to break the rules and get online when they shouldn’t.

The survey has been designed into an accessible infographic which details all the findings and help for parents who want to control and reduce their children’s internet use. You can view the infographic below:

How to Plan the Most Luxurious Wedding in 2023