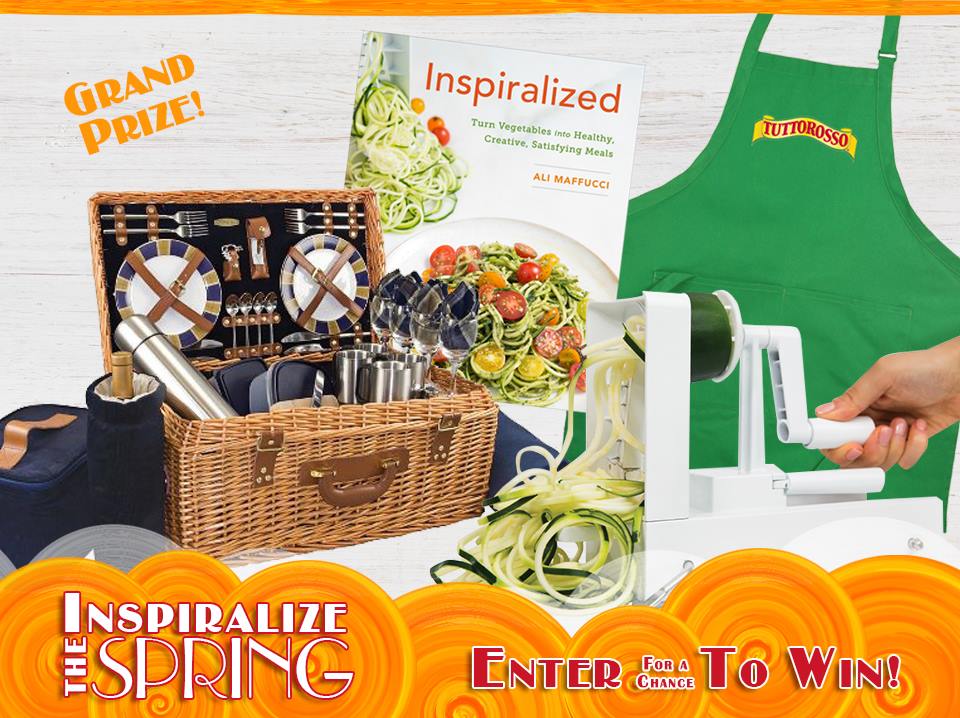 Disclosure: I received a Tuttorosso Sample Kit as a thank you for sharing this promotion. All opinions are my own.

Spring is finally here and it’s time to make room for light and delicious Italian inspired dishes featuring Tuttorosso Tomatoes and spring ingredients. Even cooler? The low carber in me is super excited that Tuttorosso is teaming up with Ali Maffucci of Inspiralized to host a “Inspiralize the Spring” Facebook giveaway. I don’t know about you but that idea puts a little “spring” in my step!

The Facebook giveaway runs now through April 15, and gives fans a chance to win weekly prizes. The prizes include Spiralizers (20/week), Inspiralized Book (5/week) and Aprons (250/week). There is also a grand prize package of a Spiralizer, Inspiralized Book, Apron, Picnic Basket and Kitchen Gadgets. Just go to https://www.facebook.com/tuttorossotomato to enter.

You know what else might put a little spring in your step? I’m also giving away a Tuttorosso Prize Package featuring an Inspiralized cookbook and Tuttorosso coupons. This giveaway is separate from the Tuttorosso Facebook promotion and is exclusive for my readers.  A winner will be chosen at random on April 16th.

To give you an idea of the recipes that Ali has developed with Tuttorosso and what you can create do with Tuttorosso, I’ve included one amazing recipe below  – the Spiralized Turnip Mushroom and Tomato Risotto. Yeah, you know you want to try it!

salt and pepper, to taste

Place the turnip noodles into a food processor and pulse until rice-like.

Place a large pot over medium heat and add in the olive oil. Once oil heats, add in the onion, mushrooms, garlic and red pepper flakes and cook for 5 minutes or until onions turn translucent and mushrooms begin to wilt.

Add in the turnip rice and season with oregano, salt and pepper. Stir to combine and then add in the tomatoes.

Cook, uncovered, for 10 minutes, stirring frequently, or until turnip rice softens and cooks to your preference. Once cooked, fold in the cheese and stir until fully combined.

Transfer to a serving dish, garnish with parsley and serve immediately.

Based in the Midwest, Tuttorosso is proudly grown by Red Gold, which is a third generation family-owned and family-run company. The tomatoes are carefully grown in Indiana, Michigan and Ohio, where the climate and soil are perfect for tomatoes.

Homemade Health: How To Make Fermented Foods at Home

Consider These Amazing Dishes To Impress Your House Guests