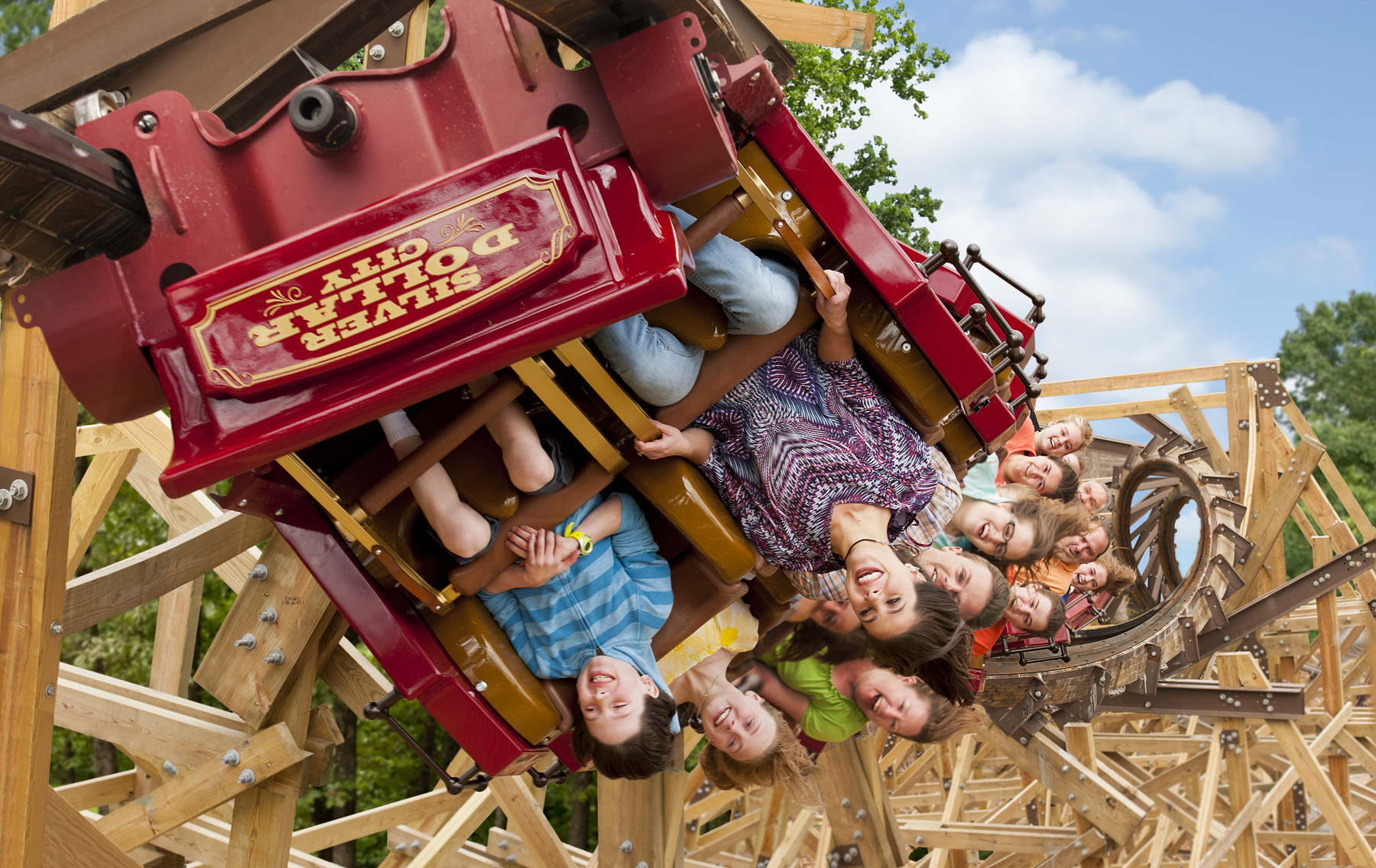 I’m not even sure where to begin this post! There are so many things that I want to say and even if I hit the mark I won’t be able to accurately convey to you all just how great Silver Dollar City in Branson, Missouri really is. Honestly, the entire experience is one that memories are made of. We had So. Much. FUN!

I’ll warn you – if you are planning to spend any time in Branson, you’ll want to schedule in two days or more to visit Silver Dollar City. Otherwise, you’ll definitely miss something. If you live within two-hours or so of Branson, definitely invest in a Silver Dollar City season pass- it’s cheaper than the cost of two one-day passes and you get into all of the shows and can ride all of the rides unlimited all year round! If we lived closer we would scoop up this deal in a heart beat!

I love this description of the atmosphere and fun to be had at Silver Dollar City.

Along with Silver Dollar City’s growth and the addition of high-quality production shows and high-tech rides — themed to keep an old-fashioned look — “high-touch” elements remain. Visitors join the activities of an 1800s homestead at the McHaffie Cabin. Kids are deputized by the town marshal. Gospel singing beckons from the door of the 164-year-old Wilderness Church. One can smell the aromas of succotash cooking on an outdoor skillet and feel the waxy bars of freshly made cakes of lye soap. The ringing of the blacksmith’s hammer on the anvil invites visitors to watch his work at an open-air forge. The craftsmen show their techniques, share the history and answer questions, such as why hewing the logs for a cabin makes it strong enough to stand for centuries.

If you are a thrill seeker looking for rides, you’ll find them here! If you are a history buff (like me!) and just enjoy the old homesteads and craftsmen, you’ll find exactly what you are looking for. There is shopping and tons of food options plus plenty of places to just sit, relax and take it all in. Oh, and the shows! There are shows happening at any given point during the day – you’re guaranteed to find something!

The sounds of banjos, fiddles and mandolins mingle with the savory smells of slow-smoked barbecue as Silver Dollar City Celebrates America with an all-American festival: Bluegrass & BBQ.

From the music to the smells and definitely the tastes, Silver Dollar City is alive with Bluegrass & BBQ, just one of seven festivals offered throughout the year in this incredible theme park! We arrived on the second day of the Bluegraass & BBQ festival and were treated to award winning musicians to award winning barbecue! Now, you might recall my diet- I definitely put it on hold for some amazing barbecue beef brisket from Hawgwilds! My mouth is watering just thinking about it! (Hey New Englanders – Where the heck can I buy beef brisket anyway?)

We’ve been back home from Branson for just a little over a week but the BBQ continues on right here in New Hampshire! (Sans the darn brisket-must find!). We brought back the new Ozark Mountain Apple BBQ Sauce and are enjoying it at home! This sauce was just one of more than 150 sauces available for tasting during the Bluegrass & BBQ festival!

The House of BBQ serves up Silver Dollar City’s famous flavor feast from St. Louis-style ribs and smoked chicken to Texas brisket and sweet roasted corn on the cob — direct from large outdoor charcoal grills and a custom-made 9-foot smoker. The festival’s signature dessert is a 25-lb. apple pie baked in a 2-foot wide cast iron skillet. Another back-by-popular-demand feature is an all-you-can-eat BBQ rib feast on the Square each afternoon with fall-off-the-bone smoked ribs, plus SDC’s famous 18-hour smoked brisket, along with smoked pork, chicken and sausage.

We enjoyed our lunch with some local Silver Dollar City regulars. They told us that the “An Old Time Christmas” festival is there favorite of all seven festivals. Silver Dollar City also features Star-Spangled Summer, Southern Gospel Picnic, National Harvest & Cowboy Festival and World-Fest. Plus, their year long theme is “Celebrate America” and that they do!

Would you believe that Silver Dollar City started out as a cave tour? Yep! The big attraction here was the Marvel Cave which actually started out as the “Marble Cave” because it was thought to contain marble!

[Tweet “From natural wonder to international attraction, it all started with a hole in the ground. #SDC”]

The hole, first called Marble Cave because the limestone walls were thought to be marble, was one of the first attractions in what would become Branson. Eons old and hidden beneath the hills, it was first discovered by the Osage Indians in 1500, described by geologists in the 1860s and explored in the 1880s by adventurers who lowered themselves on ropes 200 feet into the main chamber. One of those adventurers was a newspaper publisher who began to write about the cave’s beauty and mystery.

A group of Union Civil War veterans formed a mining company to mine resources from the cave, mining tons of nitrogen-rich bat guano from the cave in the 1880s, but finding no marble. Scientific American magazine described the cave in 1885, and word of the natural wonder spread throughout the continent. Canadian mining expert William Henry Lynch read of the cave, purchased it sight unseen, traveled to the Ozarks and, with his two daughters, opened the cave to public tours in 1894…

In 1946, Chicagoans Hugo and Mary Herschend vacationed in the Ozarks and discovered the cave now called Marvel Cave because of its awesome proportions. They loved the cave, which was run by Lynch’s daughters. When the Lynch sisters decided to retire, they offered the Herschends a 99-year lease on Marvel Cave.

This was just the beginning for the Herschend’s who eventually thought about ways to make guests waiting to tour the cave more comfortable. Eventually they recreated an old mining town that had surrounded the entrance to the cave in the 1880’s. As the amusement side of things began to grow, so did the number of visitors. The company is still family owned today!

Oh, and the name? In 1960 the Herschends decided to create some word of mouth exposure – and gave their customers their change in silver dollars. When the customers purchased goods away from the park they’d explain that they’d received them at Silver Dollar City. Brilliant marketing pre-internet, eh?

Additional rides include the explosive launch roller coaster PowderKeg, named the Best Family Thrill Coaster on the Planet by Thrillride.com; the multi-looping roller coaster WildFire; the super-soaking water raft ride Tom & Huck’s RiverBlast; and the Giant Swing that launches riders more than seven stories in the air and nearly upside down at roller-coaster speeds. The Grand Exposition area of the park has 10 family rides that recreate the era of the World’s Fairs and Expositions of the late 1800s. Attractions such as Half Dollar HollerandThe World’s Largest Treehouse at Geyser Gulch provide interactive play areas for kids and families, and entertainment is showcased in on-park theaters ranging in size from 150 seats to 4,000 seats.

The Culinary & Craft School offers guests behind-the-scenes experiences, presenting culinary classes on legendary Silver Dollar City home-style cooking. I had the opportunity to sit in on a class with Master Craftsman of Culinary Arts Debbie Dance Uhrig. This particular class was titled, “BBQ Turn Arounds” and the hubs and I were lucky enough to not only watch Debbie prepare the foods but to also sample them! If you’ve never had Cowboy Candy, aka Candied Jalapenos, you don’t know what you are missing!

The Culinary School is decorated with items from many of the Master Craftsmen throughout the park including the blacksmith and glass blowers. Check out this amazing chandelier!

Demonstrating Craftsmen can be found throughout the park. In addition to the Culinary Arts, you’ll finf Bakers (and the most delicious cinnamon buns you’ve ever tried), a Master Glass Cutter, Mater Potter, Master Candy Maker, Master Chip Carver, Master Bladesmith, Master Glass Blower, Master Craftsman Leather and a Master Blacksmith. Each of the craftsmen’s work can be seen displayed throughout the park and most have attached gift shops where you can purchase one of a kind items! I really enjoyed watching the Craftsmen work and they are wonderful about talking with you about what they are doing and answering any questions you might have!

Some of Our Silver Dollar City Photos

You can read my review of the Showboat Branson Belle here. You definitely can’t miss the dinner cruise! And, its perfect for families!

I think that when we go back to Branson with the kids we will plan to stay at Silver Dollar City’s Wilderness Campground and Cabins. The log cabins are so incredible! I think the kids would definitely prefer staying here over a hotel! Even cooler? The rustic Branson log cabins were hand-hewn by Silver Dollar City craftsmen. All are equipped like home, with everything you need to read by the fire, relax under the stars, or serve up a barbecue on your private gas grill.

We were a little to early for White Water so we didn’t get to check it out but we are totally going back with the kids and this is on top of our must-do list! They have a new waterslide at White Water called the KaPau Plummet. If you are a thrill seeker you will want to take the plunge! Check out the video!

Riders will speed at 26 feet per second into a looping 240-foot translucent water-slide before final splashdown. Spectators will be able to watch the riders’ rocket-like plunge and see them spiral through the loops.

KaPau Plummet is the centerpiece for White Water’s upcoming season that includes more than a dozen rides and attractions, “Dive-In” movies on a giant screen above the wave pool and night rides during the Night Water event. White Water, one of the Silver Dollar City Attractions in Branson, is open May 17 – September 7.  For details, schedules and information: 800-831-4FUN(386), www.bransonwhitewater.com.

Tips For Having A Fun & Safe Family Road Trip

Flying Private Vs First Class: The Pros, Cons, and Costs

5 Safety Tips to Teach Your family When Camping

Reasons to Repair Your Roof After a Storm

Holiday Logo Design is crucial for businesses during the holidays

How to Support Your Kids with Their Interests & Hobbies