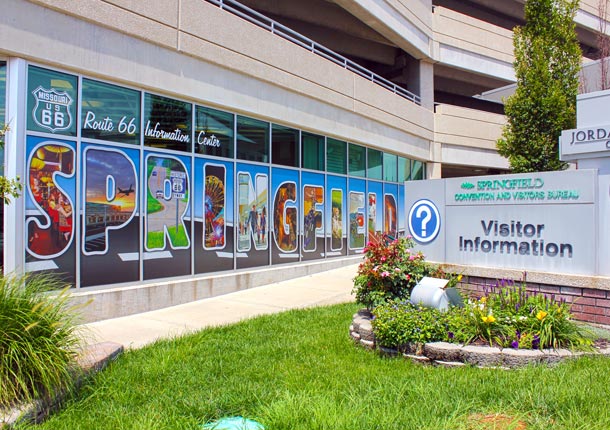 You probably already know about my upcoming trip to Branson, Missouri. It’s a media tour/5th anniversary celebration/honeymoon! My husband and I are flying from Boston to Branson next week and we’ve added a full day to our itinerary! Yup, Springfield, Missouri here we come!

I connected with Susan over at the Springfield Convention & Visitors Bureau and she gave us some great ideas for a short day trip into Springfield which is just about 45 minutes North of where we are staying in Branson.

Susan was hard pressed to pick a few activities for us to enjoy when there really are so many great things to do! But, we think she did a fantastic job!

My husband is the religious fisherman, I’m the curious history buff. Susan met us right in the middle with some fantastic ideas!


Springfield is rich with interesting and entertaining attractions, more than 6,300 hotel rooms, more than 800 dining options and a variety of shopping and cultural activities.

Not only is Springfield’s geographic location at the center of the country, but on more than a few occasions this town has found itself smack dab in the middle of history. From the Louisiana Purchase to the Civil War, from the railroad to the famous Route 66 – it all happened here and made Springfield what it is today.

[Tweet “Springfield MO #History From the Louisiana Purchase to the Civil War, the railroad to the famous Route 66! #SGF “]

What We’ll See in Springfield

Passages Treasures of the Bible

“Passages provides the casual visitor and the intellectually curious—those of faith and those of no faith at all—with a one-of-a-kind opportunity to go behind the scenes of the most influential work that humankind has ever labored to capture, preserve, translate and study,” said Dr. Jerry Pattengale, executive director of the Green Scholars Initiative, which is overseeing advanced research on items in the collection.

Wilson’s Creek National Battlefield, one of six national parks in the state of Missouri, is a perfect stop for an entertaining and educational experience.

Fought on August 10, 1861, the Battle of Wilson’s Creek was a pivotal battle in Missouri and the second major battle of the Civil War. When the smoke cleared, more than 2,500 Union and Confederate soldiers were killed, wounded or missing in five hours of intense fighting. The visitor center features a new 27-minute film, a museum and changing exhibits. A five-mile self-guided tour road allows visitors to explore the battlefield at their own pace. Walking trails lead to various battle sites, including Bloody Hill, the Historic John Ray House and the Edwards Cabin.

The Battle of Springfield Driving Tour

In January 1863, Union forces defended the Springfield territory during the Confederate attempts to gain supplies and high-ground access. Twelve markers placed throughout the battleground commemorate where defenses were organized, troops gathered supplies, injured soldiers were hospitalized and homes were burned.

What We’ll See Next Time in Springfield

Fantastic Caverns, Smallin Civil War Cave, Dickerson Park Zoo, Hammons Field baseball and so much more! We are already discussing a return trip to both Branson and Springfield with the three kids in tow!

Check out the Free Springfield Visitor’s Guide for some other great ideas!

Must Eat in Springfield

We’ll be meeting Susan at Leong’s Asian Diner for famous Springfield-Style Cashew Chicken and to talk more about Springfield!

Did you know this dish owes most of its popularity to Springfield?

The deep-fried version of the dish is closely associated with the city of Springfield, Missouri. Deep-fried cashew chicken was apparently first served in 1963 at the Grove Supper Club in Springfield. David Leong, the chef, who moved to the United States from China in 1940, struggled to gain acceptance for the foods of his homeland so he began searching for a dish that would appeal to local residents’ taste buds. His famous deep-fried cashew chicken recipe was so popular he soon opened Leong’s Tea House in Springfield. The dish became exceedingly popular in the Springfield area and is often cited as the unofficial “dish of the city”. Springfield even hosts an annual festival that is centered around this chicken dish.

Springfield has more than 1,000 restaurants with everything from elegant to family-style. There’s Something to please every palate! See Springfield dining options here.