Loving This Historic Photo of My House 100 Years Ago 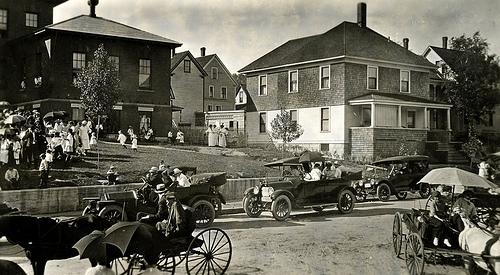 I found this gem of a photo a few weeks ago while doing a little research on the history and origins of my house. I was so excited to come across this great snapshot of time from 1915! And, can you believe that this old house was already 25 years old in this photograph? Interestingly enough, it looks almost exactly the same as it did 99 years ago when this picture was captured!

Well, except we just  finished taking that old porch down before the snow came and took it down for us. The only other real difference is the cedar siding today is painted and covers the entire house, not just the top half. That, too, may change this Spring as we are seriously contemplating new vinyl siding. It’s not so much historically relevent but its cost and wear effective so it may be the way we go. But, that will be another full series of blog posts later on.

Getting back to the photograph, we happen to live right next door to a school. It now houses an elementary school  next to us with a large gymnasium behind us. The gym connects to the other section of the school which is the middle school. As it turns out, the school was once the city’s high school and this photo was captured during the 1915 graduation there. I love how its such an interesting point in time where both motorcars and horse drawn carriages were in use. And, then, there is my house standing tall and proud in the middle of all of the action to its left.

That little tree in the photograph? It’s now as tall as my house, luminous, and about to go the way of the porch before it can do any kind of damage to my house or to the cars that line the street during the typical school day.

And, since I’m introducing you to this great historical find, I thought I’d share some big news! In just four days I will be putting my student cap back on! After a five-year lull, I’ve finally decided to finish my Masters Degree. I’m very excited!! In order to gain readmittance to the college I was charged with writing a Statement of Purpose and an Analysis of a Primary Source. What better primary source than a 99 year old photograph of my home?! As for my statement of purpose, in case you might be interested, here is the brief version…

“I refuse to believe that all the stories have been told. Though the heroes are gone and many forgotten, their lives live on through the things that they left behind. Whether something buried just below the surface of the earth in the center of a cellar hole or a ragged family bible hidden away in some stack of “old books,” the stories are there. Stories that beg to be interpreted, vetted, researched and brought into today to give us a better understanding of the life that was before us. I want to bring those stories to life, preserved and explained for future generations to find and fall in love with.”

So, that’s what I’ve been digging into for the New Year. How’s 2014 going for you so far? Any big plans, news or other happenings you’d like to chat about?

4 Options for Keeping Your Home Cool During Summer