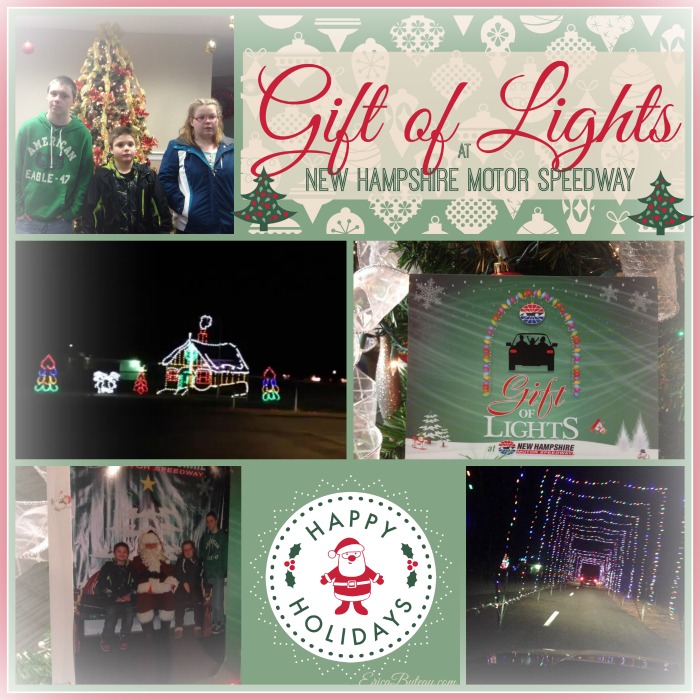 I recently mentioned that I was going to take my family to the Gift of Lights Drivethrough Light Show at the New Hampshire Motor Speedway in Loudon, NH. We decided to go on Saturday. Our day began at home with a reporter coming to interview us about our #GivingTuesday Coat Drive. Then, we loaded up the car with the five of us and two friends! On days like that, I don’t miss my Jeep at all. Seven passenger seating in my Durango is a lifesaver!

Our drive to the Gift of Lights show is about two hours so we decided to add in another activity to round out the day. We googled nearby movie theatres and found one where the timing lined up pretty nicely. I was so pleasantly suprised when we arrived at Smitty’s Cinema in Tilton, NH. They are set up to dine while you watch the movie with waitstaff on hand. We ordered some appetizers and a pitcher of soda and got super comfortable in their amazing atypical movie theatre seats. Now crowding, no feet in the back of the head. Awesome!

We all planned to see Free Birds but when we realized that the Hunger  Games Catching Fire was playing, we split off into two groups. Five of us went into that theatre and two into Free Birds. The movie was amazing! The ending though, ugh, it comes too soon and leaves you begging for more. We will be back for the third movie! Luckily, I, as well as my 14 year old have already read all three books. In fact, it was my 14 year old at the age of 12 that introduce me to the series- and found his love of reading thanks solely to the Hunger Games.

He also summed up our day quite well,

My day went from. A reporter at my house. My girlfriend coming over. went to tilton to watch catching fire. Then went to the new Hampshire motor speed way for a light show. Seing santa. Winning a scratch ticket. Making smores. Riding home in a blizard. Dropping the babe off at home. Then on to my home. Watching gta V on youtube with sam. A loud crash. Me dialing 911 and running outside with sam with a car crash . Talking to police. Talking with nicks dad. Nick coming over. Me telling nick about it. Watching vines . Then watching pranks and now this status then off to bed.

When someone asked him how he liked the movie he replied, “Gooddd.!! Cried .. Smiled. Jumped. Poor cinna.;((” Win! When we left the movie it was plenty dark enough to head over to the Gift of Lights.

We had no trouble finding the Gift of Lights since it was at the New Hampshire Motor Speedway and there are signs directing people there all over the place. I did fumble a bit trying to figure out where to enter but was fine once I had that under control. I paid for our admission with my blogger pass, purchased a couple of snowflake glasses and we got on our way. We tuned in to 94.9 which has been playing all Christmas music all the time for probably a few too many weaks too early but we were glad to have the holiday tunes to get us in the spirit.

We enjoyed the two-mile drive through Christmas land that would have National Lampoon’s Christmas stars in an uproar. Well done, beautiful lights and a nice tie-in to NASCAR since that’s what this speedway, and Loudon, NH are most known for. At the end of the tour we parked and visited the gift shop. We were able to have our kids’ photo taken with Santa for $5 there and then the younger kids got to color and write letters to Santa and Mrs. Claus. There was a cute, well decorated BBQ food truck but we bypassed this and headed straight to the bonfire and free S’mores!

Save $2 to Gift of Lights Drive Thru Light Show

Save $2 on the cost of admission with this coupon from USFamilyGuide.com

Once we’d had our fill of the free S’mores we decided it was time to go get some dinner. I thought that the Gift of Lights was well done but would have been quite pretty with some snow. I regretted that thought not five minutes after leaving the NH Motor Speedway when the snow began to fall in a fury, along with ice pellets and the dark, unfamiliar roads began to glaze over. A few moments later we came upon two vehicles off the road, one on each side. I kept it slow and steady and made a mental note of a few additional tire tracks that went into ditches. With a two hour drive home, heading north through the Notches already famous for horrible weather and roads I knew dinner had to be quick!

Rather than grabbing pizza we opted for Wendy’s. Quick in, fast food, get out, go home. But, after eating there was plenty of laughter, running and snowball throwing! I let the kids burn off some energy and have some fun. This was the first “real” snow we’ve seen this season. Finally, after lots of laughs we piled back into the Durango and set out on our trip North.

We saw a few cars off the road on the highway and for the good partof that drive, I saw nothing but snowflakes and maybe three feet in front of my iced over hood. I was literally driving 30 miles per hour in a 65mph zone, trying to find my way, and to figure out where my lane was. The kids were all SO very well behaved I wondered a few times if I’d left them behind. They gave me the quiet that I needed to concentrate on the drive. We arrived home safely about three hours later. My eyeballs were literally sore from working so hard to see where I was driving us!

At around 10pm I crawled into bed and covered myself with my wool blanket and heavy quilt. It was an amazing but very long day! As I started to relax I heard a vehicle come down the hill much too fast followed by a very loud bang. My husband and I rushed to the window to see what was happening and saw a head on collision. I grabbed my phone and started dialing 911. When I got to the bottom of the stairs I ran into the 14 year old already on the phone with 911 and my friend Sam who is here visiting. Sam has EMT training and was a firefighter in North Carolina. She happened to be first on the scene and helped with a man who appeared to have a pretty serious neck injury.

We waited for the police, fire and ambulance to arrive. A combination of the slippery hill, the speed and unfortunately, drugs and alcohol, caused the accident. There were three people involved and luckily all survived. What a crazy way to end an amazing day!!