Remembering the Old Man of the Mountain #NH 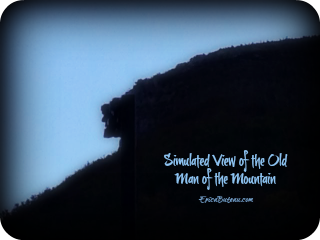 Some people say that there are two New Hampshires- North of the Notch and Below the Notch. The “Notch” referring to Franconia Notch… a narrow stretch of one lane highway on Interstate 93. I have allways lived “north of the Notch” which meant that whenever I really travelled anywhere as a child we’d have to drive through it.

I looked forward to one specific site on any drives south, right in “the Notch”. The Old Man of the Mountain. My brother and I would compete to see who could see it first. That great stone face would hide from us on foggy days and we’d feel so disappointed!

We never really stopped to view the Old Man. We kind of just passed it by, excited to see it in a silent nod to something that always was and we thought, always would be. Eventually, when I grew up and had my own children I’d pass it by with babies, then toddlers in the backseat. I would point it out to them and they’d seem interested.

One early morning in the Spring of 2003, we were on a road trip to see my then in-laws. The kids were 2 and 4 in the backseat. It was one of those foggy, deprivous days through the Notch. The Old Man of the Mountain was hidden, still deep in slumber from a long, cool Spring night. Or, so we thought. We went by and continued on our way to a fun day with my kids’ grandparents.

When the kids had had their fill of double stuff oreos, shopping, pizza and all of the other grandparent-induced spoiling, we packed them in the car to make the 2.5 hour journey back home. It was dark so we wouldn’t try to see the Old Man that night. As we came upon the Notch, something was different. There was a lot of traffic in what normally would have been a fairly quiet stretch of highway. And, then there were news vans. Reporters, photographers, people crying on the sides of the road.

The Old Man of the Mountain was gone.

He’d fallen. Crumbled. The Old man was piles of rock at the base of a faceless cliff. The quiet face I’d been waving to for over 20 years, the face I was excited to share with my kids and see them wave to for 20 more years… the Icon of my state, our great state of New Hampshire… was gone.

For a few years after the “Great Stone Face” came down we’d drive through, tell stories about seeing the face in the past and memories the site would invoke. But, we’d just keep driving. He’d cross our mind and we’d move on.

Yesterday, that all changed. We had to make the trip south to Concord for dentist appointments for all of the kids. Typically, we hit “The Notch” early in the morning on our way south and later at night on our trip back north. There’s nothing to see and no reason to stop. But, yesterday was different. We came back in the daylight, and the seven year old had to pee. “Now!” He couldn’t hold it and the safest pull off was at the former viewing site of the Old Man in the Mountain.

And, so he peed. And then I started to talk about the Old Man of the Mountain. I shared the stories. We started taking photographs. A nice elderly fisherman, preparing for his afternoon of fishing told us about the Old Man museum. The kids asked to go- and I realized that we’d almost forgotten about the Old Man. We’d given him up and let go of some of those mystical memories.

Of course we would go to the Old Man of the Mountain Museum!

All of those times that we just zoomed by, took it for granted flooded back to me. We had such a wonderful time exploring the historic site, the former home of the Old Man. We especially loved the Profile Plaza Memorial where you could visualize the face back on the Mountain where it belongs.

History of the Old Man of the Mountain

The last photo opp was on a stretch of Route 115 in Jefferson, NH for a beautiful sunset at Scenic Vista lookout. My 14 year old is taking Photography and Graphic design courses in High School and is currently enrolled in Intro to Photography. My Mom gave him an early Christmas present- his own digital camera. He couldn’t wait to photograph the sunset. I, being that crazy photo journal every single moment mom, couldn’t wait to photograph him captuiring something so beautiful!

One thought on “Remembering the Old Man of the Mountain #NH”