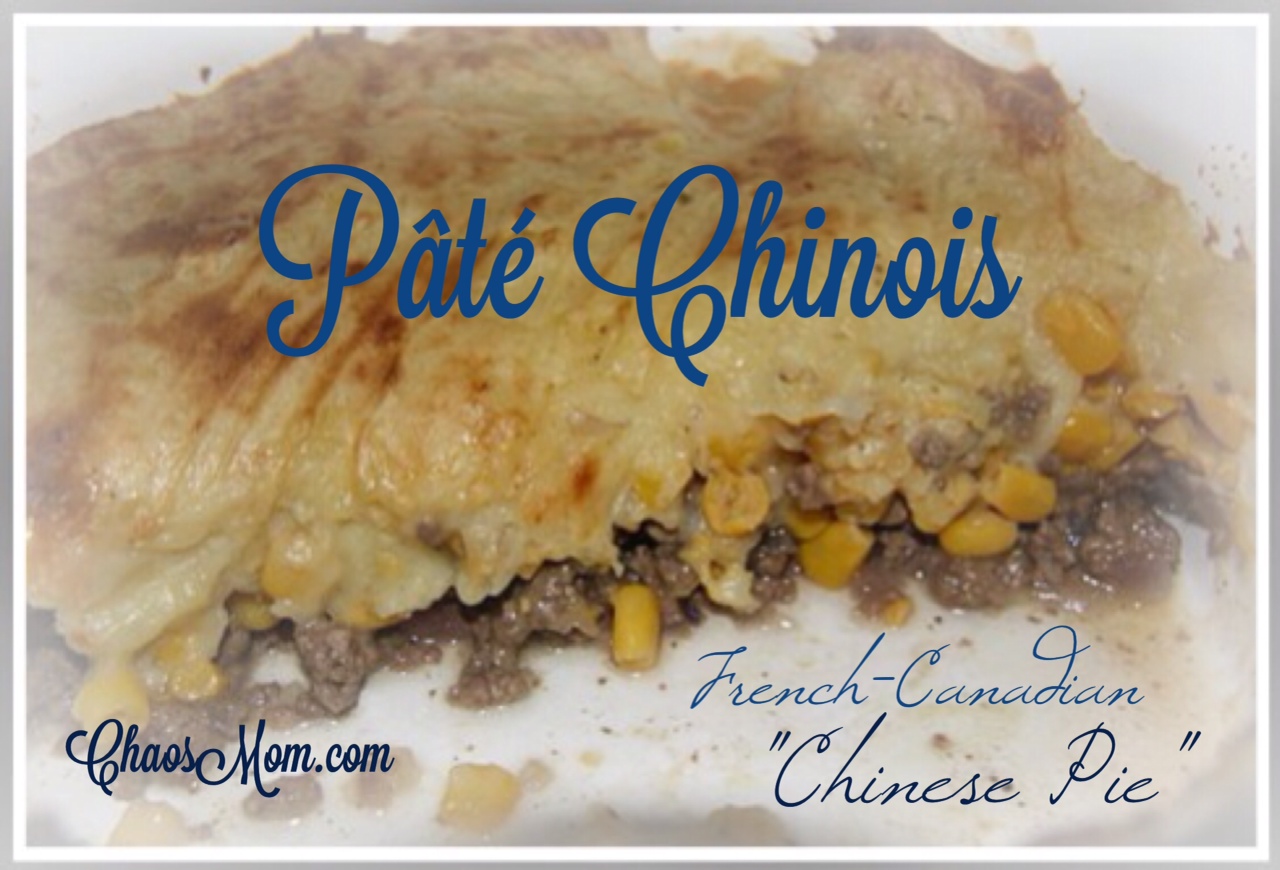 This is not a Chinese dish; it’s French Canadian or “Pâté chinois.” Its popularity aside from taste is the low cost to prepare. Growing up as the daughter of a hard-core potato farmer its no real wonder that we had some form of potatoes with nine out of ten meals. Meat, potato and vegetable was the common combination at my house.  And Chinese Pie just happened to incorporate all three in one easy to prepare dish.

I like mine with ketchup, others will tell you that ketchup ruins this meal. To each their own I say! Mom always served this with her homemade pickled beets (yes, those came from the garden as well) and usually also her homemade mustard pickles. Since she is kind enough to allow me to raid her cupboards for these items I too serve them with my chinese pie. There’s just something about pink mashed potatoes that makes me feel all warm and fuzzy inside. 🙂

From Wikipedia– primarily because I was very curious about the name origin. Found plenty of interesting info to share! Also some of what I thought were family traditions extended further into my own hertitage. Neat!

Pâté chinois (pronounced: [pɑte ʃinwa]) is a French Canadian dish similar to English cottage pie or shepherd’s pie, or French hachis Parmentier. It is made from layered ground beef (sometimes mixed with sautéed diced onions) on the bottom layer, canned corn (either whole-kernel, creamed, or a mix) for the middle layer, and mashed potatoes on top. Variations may include sprinkling paprika on top of the potatoes, reversing the layering of ingredients, adding diced bell peppers to the ground beef, and serving the dish with pickled eggs or beets. Pâté chinois (French for “Chinese pie”) is often consumed with ketchup mixed in.

Pâté Chinois is not a Chinese recipe. It may simply be an adaption of “Shepherd’s Pie”, but one possible explanation for the Chinese reference is that it was introduced to Canadian railway workers by Chinese cooks during the building of the North American railroads in the late 19th century. These cooks made it under instruction from the railway bosses (of English extraction) as an easily-prepared, inexpensive version of the popular cottage pie, with the sauce in the tinned creamed-corn serving as a substitute for the gravy.

The French Canadian railway workers became fond of it and brought the recipe back with them to their home communities. From there, it was brought to the textile mill communities ofMaine (Lewiston), New Hampshire (Manchester), Massachusetts (e.g., Lowell and Lawrence) and Rhode Island (Woonsocket) where many French Canadians immigrated to work in the mills during the early 20th century. It may also be connected to the town of China, Maine. Some Lewiston, Maine families made a variation called Pâté au Chinois layering the dish with mashed potatoes at the bottom, ground beef next, followed by peas, whole beets, and creamed corn on the top.

Cook ground beef and onions in a skillet until the meat is browned. Drain grease. Place in the bottom of a casserole dish.

Layer one can of whole kernel corn over the meat followed by one can of cream-style corn. Top with mashed potatoes. Dot with butter.

Bake at 350 Degrees for about 45 minutes or until potatoes are slightly browned and the corn mixture is bubbling.

This is an excellent way to use up leftover mashed potatoes.

*******
You can find this recipe in Moms at Home: A Collection of Recipes. Download the electronic copy for just $2.99! Also available on Amazon and Kindle.

It’s Time to Spring Clean Your Home and Your Body! Check Out My Cleaning Tips, Ideas and Recipes for a Full Day on the Atkins Plan #AtkinsSpringClean

4 Ways to Stay Healthy Through COVID in 2021

Workout Tips That Will Benefit Any Busy Mom in 2021

Benefits of Building a Custom Family Home Instead of Buying