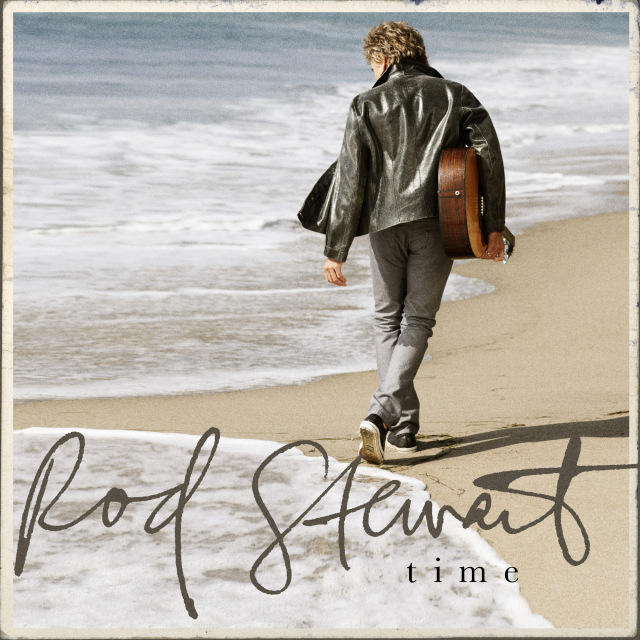 Rod Stewart has spent four decades being a rock star, three being a parent, and has a new album’s worth of rollicking stories to tell. Time is his first album of new material in almost 20 years (and his hairstyle hasn’t changed one bit!)

Time, releasing May 7th, 2013, marks Stewart’s long-awaited return to his songwriting roots and features 12 tracks, 11 of which he wrote and produced. It will be available on Amazon and iTunes.

The album was born from a burst of inspiration that came while Rod was reviewing his life for his recent memoir. Rod rediscovered his voice as a songwriter and rekindled his gift for writing the honest, nerve-touching narratives that have been the cornerstone to the first three decades of his career.

“Suddenly ideas for lyrics were piling up in my head,” he says. “Next thing I knew, I had a song called ‘It’s Over’ about divorce and separation. And now I was getting up in the middle of the night and scrambling for a pen to write things down, which has never happened to me. I finished seven or eight songs very quickly and I still wasn’t done, and it became apparent that I would eventually have a whole album of material to record.”

Along with the release of Time, Stewart is set to embark on the European leg of his Live the Life tour on June 1st, while American dates with Steve Winwood will kick off October 17th.

I love Rod Stewart. Actually, I can’t remember a time in my life when I didn’t. I grew up listening to him and am thrilled to introduce him to my daughter. In fact, we spent a nice drive together last evening listening to the CD. She actually got teary eyed at one point. Not bad for an almost 12 year old when she can literally feel Stewart’s emotion! Speaking of almost 12, her birthday is tomorrow and just so happens to coincide with the release of this album.

The first track, “She Makes Me Happy” is so catchy. I’ve had it stuck in my head for three days now. But, its great! “Can’t Stop Me Now” is exactly true for Rod! This album doesn’t just prove he’s still got it, it validates my 33 years of loving Stewart and reminds all of us why his music has carried on for 20 years without any new releases. He’s just that good. His album may be “Time” but Rod Stewart is timeless!

I participated in this campaign for One2One Network. I received a free copy of the CD to facilitate my review. By posting, I am eligible for incentives. All opinions stated are my own. This post contains affiliate links.

5 of the Best Refrigerator’s on the Market