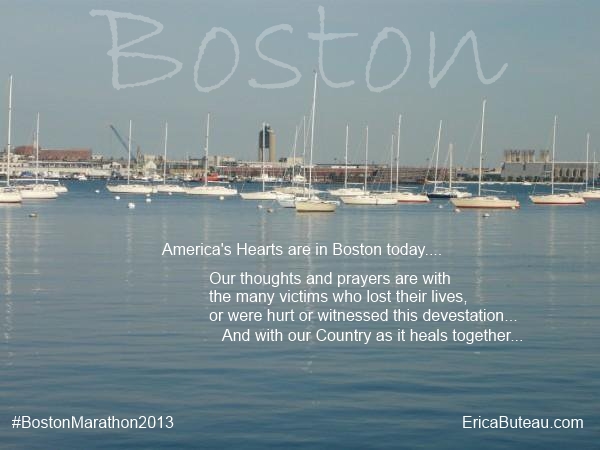 My heart is very heavy as I write this today. I spent much of yesterday afternoon and evening, like many others, in tears. Boston, for me, has always been my favorite city. I’m a New England girl after all. I love the Boston Bruins, the Boston Red Sox, the Boston Aquarium, Boston. And so, like many tragedies recently, with or without ties to Boston our hearts ache. There is too much unpredictability, sadness and evil happening around the world. But, this one hit harder and closer for me as I recognized street names and landmarks for places I’ve been with my family in tow because I felt safe there. I posted this on Facebook last night when I just felt I had to say, something. “The education, the life skills, great parents, textbooks… But, nothing has prepared me for fully understanding this world we live in. I can’t even begin to grasp the concept behind how something like this could ever happen. We may capture the monster(s) that handled the bombs but we’ll never elude the hatred behind them.”

When I went to bed last night the news was reporting two dead and 60 injured. One of the deceased was an 8 year old child. How unfair is this world where children pay the price for insanity? Sadly, when I woke up today the numbers climbed to 3 dead, 144 wounded according to CNN. The world feels this pain, America feels this pain, New England feels this pain, Boston feels this pain, I feel this pain. And, nothing can make me understand it. It hurts and I can’t imagine how the families of these victims are feeling. Grief, anger don’t seem like strong enough words to explain what those feelings must be like.

A while back I blogged about inaccuracies and the way social media kept people informed during Hurricane Sandy. I watched it move up the East Coast on Twitter and was prepared when it hit my state. But I also saw the photos that went viral, from movie stills to edited photos that were completely inaccurate. While social media does have its reliability it also contains a lot of junk! I actually learned about what was happening on Twitter yesterday! I also saw some very well known bloggers, like Chris Brogan, get targeted for their comments that really were not bad… Every tragedy seems to bring out the best, and worse in people. It seems like we need to direct our anger somewhere, at some thing or someone in order to cope with things like this. All of which becomes inflated and takes on a new life in social media! This was also true during the moments and days following the Sandy Hook Elementary School tragedy in Newtown, CT.

This tragedy had my eyes watering but when I read that Mile 26 of the Boston Marathon was dedicated to the memory of the victims of the Sandy Hook victims I was personally horrified. Family members of the victims were seated in the VIP section near the finish line where the first bomb went off. How much horror can these people seriously be expected to live through? All of my past trials and tribulations are so trivial to what these people are living with. Below is a quote from Laura Nowacki, a Newtown Pediatrician and the Spokesperson for the Boston Marathon team, Newtown Strong, a group of runners from Newtown running in honor of the victims of the Sandy Hook massacre. Could this be any more heartbreaking?

I know that we are all feeling helpless. But, there are a few things that you can do. Yesterday, I gave forward to a completely unrelated fundraiser in honor of those impacted by this tragedy. I donated a few dollars to an Elderly woman who, on the day of her son’s passing, called her landlord to explain that her rent in May would be late because he paid half. A good friend of mine heard the story and immediately set up a fundraiser to gather up her missing half of the rent for a couple of months. It wasn’t much, but, without knowing where or how to help, I felt like I could at least help someone, somewhere.

The American Red Cross reports having enough blood to meet this demand but encourages donations in the future.

ABC News has a great list of ways to help on their blog here.

CNET has compiled a great list of ways to help here.

A word of caution… PLEASE do not donate money or other resources until you have fully researched the fundraiser. Look for reputable sources such as .org and .gov sites for information. Stick with major Broadcast and Press outlets and don’t fall victim to the many scams and falsities that are inevitable in situations like these.

Reasons to Keep a Safe in Your Closet

How To Tell If Your Friend Is Safe To Drive