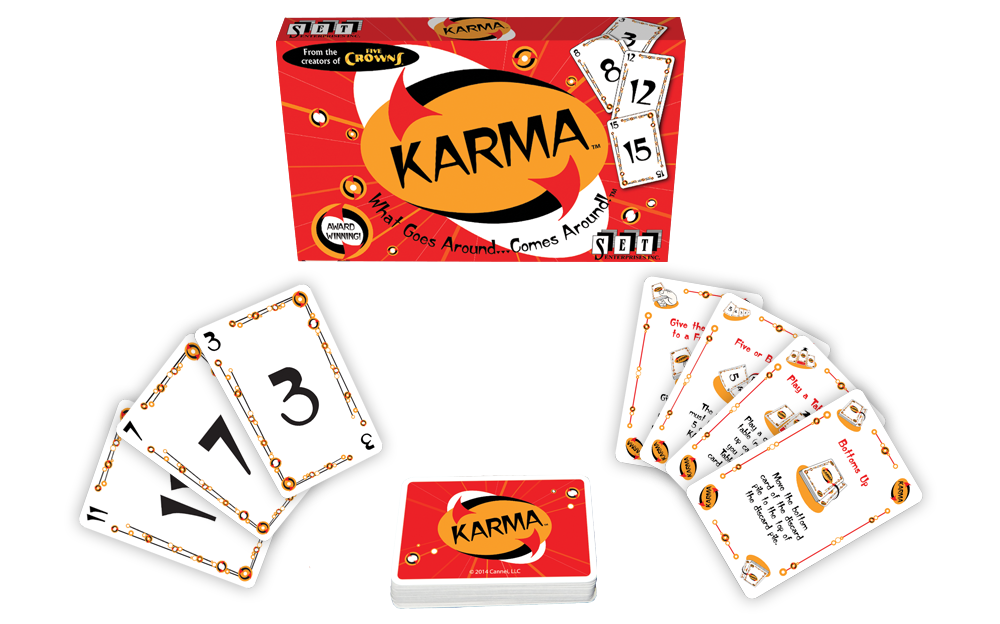 What goes around comes around, right? Of course! Now imagine this fun card game where everyone wins perfect for the whole family! Karma is an award winning game by SET Enterprises, Inc. recommended for ages 8 to adult, is optimal for 2-6 players and takes about 40 minutes to play a full game. Playing with a crowd? Mix two decks together for up to 12 players! Can you say party time?

This thrilling game really gets the competitive juices flowing. In the game of Karma, you never really know who is going to win until the very last card. Social and competitive players alike will enjoy the clever nuances this game has to offer. The 4 different KARMA CARDS, like wild cards, make this game one with an ending that is a challenge to predict.

The goal is to get rid of all your cards. KARMA is an elimination game where everyone wins – except for the last player holding cards. Each turn play a card of equal or higher number to avoid picking up the entire discard pile. Move through your cards faster by playing doubles & triples. There are four different KARMA CARDS in the deck and they can be played on any card. Be sure to use them wisely because in this game…What Goes Around…Comes Around!

“PLAY A TABLE CARD” KARMA CARD:  This card allows you to play a Table Card(s) early.

“FIVE OR BELOW” KARMA CARD:  This card requires the next player to play a number 5 or lower or a KARMA CARD.

Karma scores a perfect 10 with ButeauFull Chaos, too! It really is so much fun and it’s the perfect addition to your family’s game night stash! No mess or a hundred pieces to keep track of (and if you’ve never stepped on a Monopoly piece barefoot, well, count yourself incredibly lucky). The game is not only fun, it’s super easy to learn and to teach the kiddos how to play along with you!

Watch the video below to see how to play Karma!

Disclosure: Our family received a free Karma game for review purposes. All opinions expressed in this post are my own and represent our observations as well as reflect information provided by the Karma game’s manufacturer. To learn more about Karma click here.