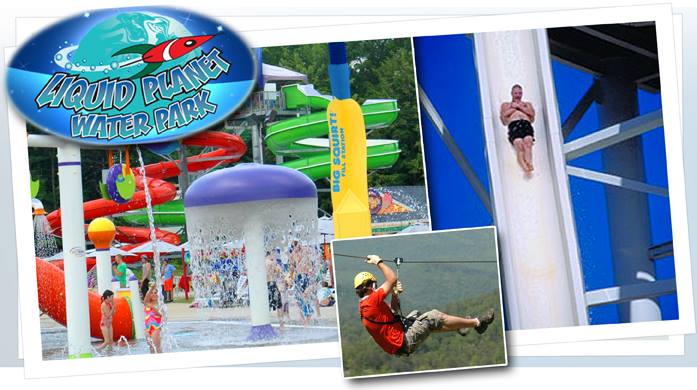 [Tweet “$5 Off Liquid Planet Water Park and Zip Lines http://usfamilycoupons.com/coupon.php?regionid=75&bid=11131&dealid=1200 @LiquidPlanetWP @usfg”]Advertised as ‘gravity defying and only for the brave and fearless at heart, The Shooting Stars, two 40 foot vertical dropping speed slides will be celebrated and officially open following the cutting of a ribbon on Saturday, June 21st. It’s been a long time in the creating, but on opening day for Liquid Planet Water Park And Zip Lines in Candia, N.H. customers will be told to ‘cross their arms, make a wish’ and shoot the 40 foot vertical drop along 131 linear feet and fall into a smooth landing of cool water.

The ‘Shooting Stars’ were slated to open last season, but a southern hurricane damaged the manufacturing facility and to the disappointment of Liquid Planet and their customers the slides sat mostly erect, but not usable. “The delay makes the opening of the slides that much more exciting and we are thrilled to kick off our seventh season with a ribbon cutting celebration to officially open them.” Said Kevin Dumont, President of Liquid Planet Water Park L.L.C. “The Shooting Stars are the real deal when it comes to thrilling water park attractions. They are steep, fast and a real adrenalin rush.” Dumont said. The Shooting Stars certainly look official. They are decorated with racing stripes and checkered flags line the slide course. “These new slides will allow our guests to have a lot of fun racing against each other and we hope to incorporate races and competitions.” Said Kelly Dumont, General Manager of Liquid Planet Water Park L.L.C. “They also bring the element for older kids to get more from the park experience.” She said. Entering its seventh season, Liquid Planet Water Park And Zip Lines will introduce several new features and attractions to the park including a new dock and slide set up and expanded beach at ‘Crater Lake,’ ‘Fantasy Falls,’ a cascading waterfall down the granite cliff, a newly built ‘Cosmic Camp,’ summer camp, expanded concrete areas, roofed shade areas, a remodeled zip line gear up station, a revamped miniature golf course and many aesthetic touches ranging from landscaping to paint.

“We have brought new features and attractions every year since we opened in June of 2008.” Says Kevin Dumont. “We listen closely to all of the feedback from our guests and work hard to incorporate the changes and improvements noted as creating a better park experience.” He said. “The opening of The Shooting Stars and multiple other items we are introducing this season are the goals we set to be in place for our guests this year. We are thrilled and excited to open.” “It is our ambition to be New Hampshire’s hometown water park and we’re on our way.” He said.

Visit US Family Guide HERE to print your coupon for $5 Off Liquid Planet Water Park And Zip Lines Admission! Watch for my upcoming review, too!

5 Water Activates You Can Enjoy When Traveling Through CA

6 Family Friendly Things to do While in Yellowstone

How to Make Your Life Easier on a Road Trip