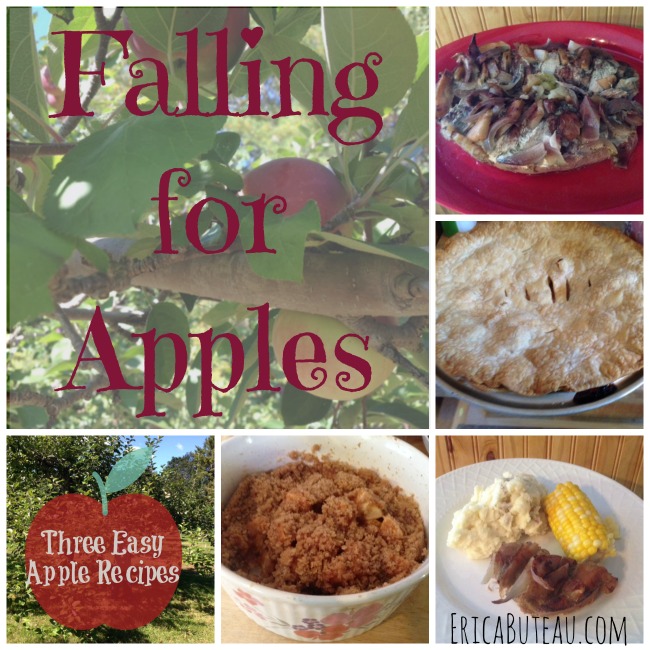 For us, Fall usually means pumpkin flavored anything (like the new Pumpkin Swirl Hot Chocolate at Dunkin Donuts? Wow!! Yum!) and it also means apples galore. I was a bit disappointed in our apple picking adventures this year.

First, the teenager wasn’t at all interested in continuing the tradition. To him, picking apples meant work, not fun. The 12 year old was off at her Dad’s for the weekend. So, with seven year old in tow, I was happy to still have one child to do the work- kidding!! But, it was nice to have some Mom, Dad, little guy time.

Second, there weren’t very many apples. We went to the same orchard we normally go to in Bethel, Maine every year. Gibson’s doesn’t have hay rides or apple cider donuts but they have great apples. Usually! As we were gathering the soon to be lost in the orchard picker on a broomstick and our great variety map I ran into an old friend. We exchanged the typical “how are you’s” and “its been too long” followed by her warning, there’s no apples! What? No apples? Greatttt.

As we walked in to find the Macoons and the Cortlands, my husband desperate to only pick the types of apples he loves, the warnings continued. “Not many apples today.” “Go way in the back.” I don’t know if you’ve had the pleasure of meeting a stubborn man on an apple mission yet, but, I can assure you a lot of time will be wasted- mid-orchard amid the flying knats and rotted apples… you will hike through trees, row after row of bare trees in search for the nonexistant.

Finally, with a grunt in surrender, at the very last row in the far back, my husband found the type of tree he was really looking for- one that still had apples on it. I don’t even know what kind of apples we picked. It didn’t matter! We came to pick apples and apples we would pick! Truthfully, we still managed to have a great time and managed to pick 18 pounds of apples. They taste pretty darn good, too! On to the easy apple recipes-

The day after apple picking usually means lots of extra apple eating. Want a snack? Here’s an apple? Dinner? Let’s use apples! And of course, dessert is made with apples too! I planned out my menu, an Apple pork loin in the CrockPot followed by an Apple Pie and an Apple Crisp. Two desserts, primarily because I couldn’t decide which I’d rather make! I put my pork in the crockpot, then started on the pie and put that in the oven then whipped up the crisp and put that in with the pie for the last 30 minutes baking time. While that’s cooking its a good time to whip up your mashed potatoes, heat your veggies, etc. Dinner, and dessert, will be ready in no time!

There are quite a few variations of this recipe floating around the web, especially on Facebook and Pinterest. I tried finding the original source which brought me back to this variation from PorkBeInspired.com My variation has a few less ingredients and is more like this Crockpot Honey Apple Pork Loin Recipe from CrossFit + Paleo.

I cut slits into the pork. Stuffed those with thinly sliced apples. I placed the leftover apples around the pork. Then I poured the apple cider over the pork and apples. Next, I sprinkled everything with cinnamon, drizzled with honey and sprinkled onions on top. I seasoned with salt and pepper and then set the Crockpot on low for 4 hours.

I served with mashed skin-on red potatoes, corn on the cob and a loaf of hot crusty Italian Bread.

My tried and true recipe for Apple Pie comes straight out of the Better Homes and Gardens red plaid cookbook. I cheat with rolled pie crusts. You can make your own of course but I just can’t seem to be bothered with making pie crusts. Maybe if I had more space? Maybe. Anyway, here is the recipe-

Mix together. Line your pie plate with crust, pour in the coated apples. Cover with pie crust. Crimp, make fancy, do as you wish but make sure you do cut a slit in the top crust (or a few slits, really). Bake at 375 degrees for about an hour. Cover the edges of the crust with foil for the first 20 minutes or so. Keep an eye on it and adjust time accordingly.

Not going to lie- I made this yesterday with a box mix for the crisp. I was already making a nice big dinner and an apple pie. I figured I deserved a cheat here. But, this is the recipe that I would use if making from scratch-

Place apples in a 2 quart casserole dish. Mix the remaining ingredients with a fork until crumbly. Pour evenly over apples. Bake at 375 degrees for 20-30 minutes and check the apples for doneness.