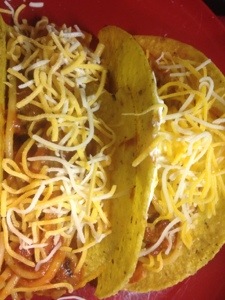 After months of begging and pleading, I finally gave in and created my version of the popular Spaghetti Tacos created and featured on the iCarly show.

The recipe says basically to mix a box of spaghetti (cooked) with a jar of meat sauce and load into a taco. I changed it up a bit. ~1 Cup leftover chili (w/meat and beans) ~1 jar of Spaghetti Sauce ~1 pound of ground beef or Italian sausage (I used sausage) ~1 packet taco seasoning ~Taco shells ~Assorted toppings like shredded cheddar cheese, sour cream, salsa, lettuce, tomatoes… Brown ground beef and/or Italian sausage. Add taco seasoning and 1/4 cup of water. Cook an additional five minutes on medium heat. Add leftover chili of you have it (If you don’t feel free to add beans or whatever you like) and jarred (or left over homemade) spaghetti sauce. Continue cooking on medium-low heat while you boil your pasta. Drain pasta, add to sauce/meat/chili mixture. Stir well. Load the spaghetti into a hard taco and top with your favorites from the list above. It’s NOT nearly as bad as I though it would be. I tested these along with my 11 and 13 year olds, my son’s 14yr old friend and my 9yr old nephew. Three out of the four kids said they liked them while the fourth ate his but said he really wasn’t a fan… This is my daughter’s take:

; And pictures of my daughter and nephew showing off their tacos!

Prep for Spring: Why You Need a New Grill for Your Patio

One thought on “Spaghetti Tacos from iCarly Equals HAPPY Kids!”